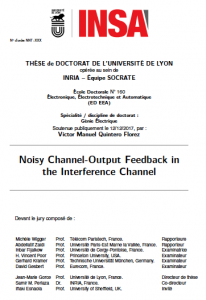 Victor Quintero will defend his doctoral thesis entitled: “Noisy Channel-Output Feedback in the Interference Channel”. On the approval of the reviewers, the defense will be scheduled for the 12th of December at 2:00 p.m. in Amphithéâtre Émilie du Châtelet – Bibliothèque Marie Curie of the University of Lyon, 31 Avenue Jean Capelle O, 69100 Villeurbanne, France.

The jury is composed by: