New Submission to IEEE Trans. on Comm. by Quintero, Perlaza, Esnaola and Gorce 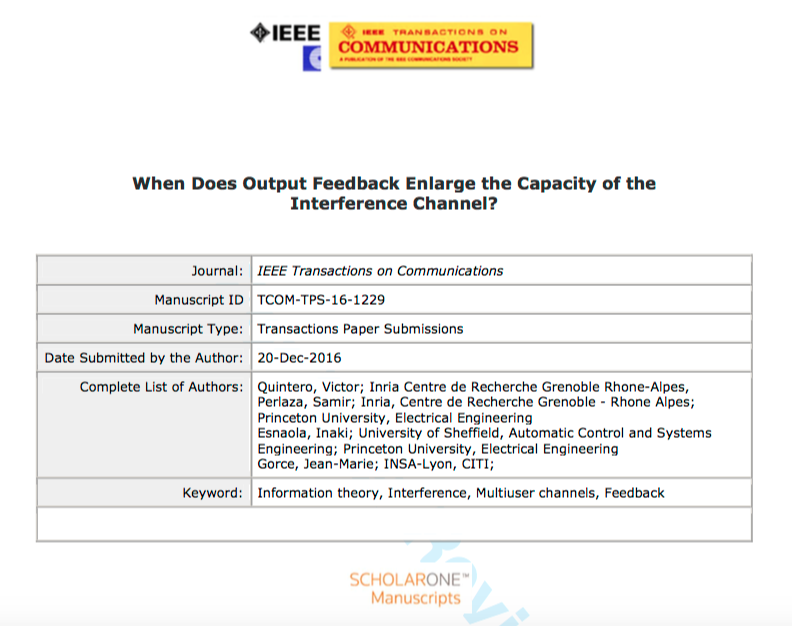 In this paper, the impact of additive noise over the feedback links in the two-user interference channel is studied using linear deterministic approximations. More specifically, only one transmitter-receiver pair is let to use feedback. Under this condition, the exact value of the signal to noise ratio (SNR) on the feedback link beyond which the capacity region of the linear deterministic approximation is enlarged is fully described in terms of the forward SNRs and interference to noise ratios (INRs). In general, three scenarios can be observed depending on the exact values of the forward SNRs and INRs. In the first case, either individual information transmission rate can be improved; in the second case, using feedback from receiver i to transmitter i exclusively increases the individual rate of transmitter- receiver pair j, with i ∈ {1, 2} and j ∈ {1, 2} \ {i}. In the third case, implementing feedback turns out to be useless for enlarging the capacity region. The same analysis is performed for the sum-rate and the scenarios in which the sum-rate can be improved, as well as the corresponding minimum feedback SNR, are fully described.