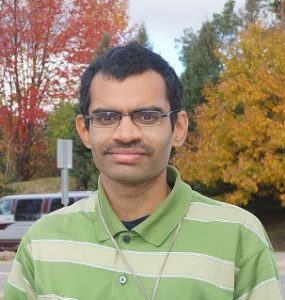 This talk entitled “New Achievable Rate Regions for Fundamental Network Information Theory Problems” will be presented by Dr. Arun Padakandla (Purdue University).  It will take place in room TD C on the 17th of July (2 p.m.).

In this talk, we consider the fundamental information-theoretic problems of characterizing 2) the capacity regions of channel coding problems such as broadcast, interference and 2) necessary and sufficient conditions for joint source-channel coding of distributed correlated sources. Going beyond independent and identically distributed codewords, we propose the ensemble of coset codes possessing algebraic closure properties and derive new achievable rate regions (inner bounds) to the capacity regions of the former problems with three or more receivers. Our findings are based on characterizing performance of new encoding and decoding rules that exploit the algebraic properties of these codes. Next, we observe that the conventional approach of single-letter coding is sub-optimal for joint source channel coding over multiple access and interference channels. We propose a novel multi-letter coding technique based on appropriately stitching together single-letter techniques. Most importantly, we characterize an inner bound to its performance via a single-letter expression, which is proven to strictly enlarges currently known single-letter achievable rate regions based on single-letter coding. This puts forth a useful technique for characterizing new inner bounds to problems that might not permit an optimal single-letter technique.

Arun Padakandla received his M.S degree in Electrical Communication Engg (ECE) from the Indian Institute of Science (IISc), Bangalore in 2008. He received an M.S degree in Mathematics in 2013 and a Doctorate in Electrical Engg (Systems) in 2014, both from The University of Michigan (UMICH) at Ann Arbor. Arun worked as a research engineer at Ericsson Research from Nov 2014 to Aug 2015. Arun is currently a postdoctoral researcher with the Center for Science of Information – an NSF funded science and technology center located at Purdue University. Arun’s research interests lie in information theory, optimization, learning and estimation, computational complexity.